Practically every measurement in Fibre optics refers to optical power. The power output of a transmitter or the input to receiver are "absolute" optical power measurements, that is, you measure the actual value of the power. Loss is a "relative" power measurement, the difference between the power coupled into a component like a cable or a connector and the power that is transmitted through it. This difference is what we call optical loss and defines the performance of a cable, connector, splice, etc. 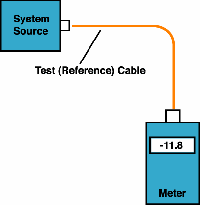 Power in a fibre optic system is like voltage in an electrical circuit - it's what makes things happen! It's important to have enough power, but not too much. Too little power and the receiver may not be able to distinguish the signal from noise; too much power overloads the receiver and causes errors too.

Measuring power requires only a power meter (most come with a screw-on adapter that matches the connector being tested) and a little help from the network electronics to turn on the transmitter. Remember when you measure power, the meter must be set to the proper range (usually dBm, sometimes microwatts, but never "dB" - that's a relative power range used only for testing loss!) and the proper wavelengths, matching the source being used. Refer to the instructions that come with the test equipment for setup and measurement instructions (and don't wait until you get to the job site to try the equipment)!

To measure power, attach the meter to the cable that has the output you want to measure. That can be at the receiver to measure receiver power, or to a reference test cable (tested and known to be good) that is attached to the transmitter, acting as the "source", to measure transmitter power. Turn on the transmitter/source and note the power the meter measures. Compare it to the specified power for the system and make sure it's enough power but not too much. 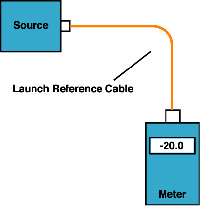 Loss testing is the difference between the power coupled into the cable at the transmitter end and what comes out at the receiver end. Testing for loss requires measuring the optical power lost in a cable (including connectors, splices, etc) with a fibre optic source and power meter by mating the cable being tested to known good reference cable.

In addition to our power meter, we will need a test source. The test source should match the type of source (LED or laser) and wavelength (850, 1300, 1550 nm). Again, read the instructions that come with the unit carefully.

Next we need to set our reference power for loss - our "0 dB" value. Correct setting of the launch power is critical to making good loss measurements!

Clean your connectors and set up your equipment like this:

Some reference books and manuals show setting the reference power for loss using both a launch and receive cable mated with a mating adapter. This method is acceptable for some tests, but will reduce the loss you measure by the amount of loss between your reference cables when you set your "0dB loss" reference. Also, if either the launch or receive cable is bad, setting the reference with both cables hides the fact. Then you could begin testing with bad launch cables making all your loss measurements wrong. EIA/TIA 568 calls for a single cable reference, while OFSTP-14 allows either method. 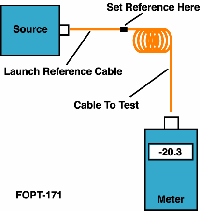 Single-ended loss is measured by mating the cable you want to test to the reference launch cable and measuring the power out the far end with the meter. When you do this you measure 1. the loss of the connector mated to the launch cable and 2. the loss of any fibre, splices or other connectors in the cable you are testing. This method is described in FOTP-171 and is shown in the drawing. Reverse the cable to test the connector on the other end. 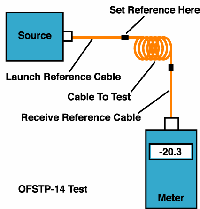 In a double-ended loss test, you attach the cable to test between two reference cables, one attached to the source and one to the meter. This way, you measure two connectors' loses, one on each end, plus the loss of all the cable or cables in between. This is the method specified in OFSTP-14, the test for loss in an installed cable plant.

What loss should you get when testing cables?

While it is difficult to generalise, here are some guidelines:

So for the loss of a cable plant, calculate the approximate loss as: