How does an OTDR work?

Unlike sources and power meters, which measure the loss of the fibre optic cable plant directly, the OTDR works indirectly. The source and meter duplicate the transmitter and receiver of the fibre optic transmission link, so the measurement correlates well with actual system loss. The OTDR, however, uses unique phenomena of fibre to imply loss.

The biggest factor in optical fibre loss is scattering. It is like billiard balls bouncing off each other, but occurs on an atomic level between photons (particles of light) and atoms or molecules. If you have ever noticed the beam of a flashlight shining through foggy or smokey air, you have seen scattering. Scattering is very sensitive to the colour of the light, so as the wavelength of the light gets longer, toward the red end of the spectrum, the scattering gets less. Very much less in fact, by a factor of the wavelength to the fourth power - that's squared-squared. Double the wavelength and you cut the scattering by sixteen times!

You can see this wavelength sensitivity by going outside on a sunny day and looking up. The sky is blue because the sunlight filtering through the atmosphere scatters like light in a fibre. Since the blue light scatters more, the sky takes on a hazy blue cast.

Figure 1 Scattering in an Optical Fibre 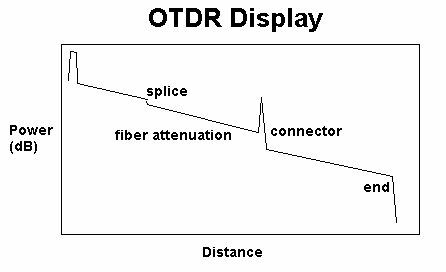 There are some calculations involved. Remember the light has to go out and come back, so you have to factor that into the time calculations, cutting the time in half and the loss calculations, since the light sees loss both ways. The power loss is a logarithmic function, so the power is measured in dB.

The amount of light scattered back to the OTDR is proportional to the backscatter of the fibre, peak power of the OTDR test pulse and the length of the pulse sent out. If you need more backscattered light to get good measurements, you can increase the pulse peak power or pulse width as shown below.

Note on the display shown in Figure 2, some events like connectors show a big pulse above the backscatter trace. That is a reflection from a connector, splice or the end of the fibre. They can be used to mark distances or even calculate the "back reflection" of connectors or splices, another parameter we want to test in singlemode systems.