Cables can be pulled with connectors already on them if, and a big if, you can deal with these two problems: First, the length must be precise. Too short and you have to pull another longer one (its not cost effective to splice), too long and you waste money and have to store the extra cable length. Secondly, the connectors must be protected. Some cable and connector manufacturers offer protective sleeves to cover the connectors, but you must still be much more careful in pulling cables. You might consider terminating one end and pulling the unterminated end to not risk the connectors.

There is a growing movement to install preterminated systems but with the MT 12 multifibre connector. It's tiny and not much bigger than a ST or SC, but has up to 12 fibres. Manufactures sell multifibre cables with MTs on them that connect to preterminated patch panels with STs or SCs. Works well if you have a good designer and can live with the higher loss (~1 dB) typical of these connectors.

Several different types of terminations are available for multimode fibres. Each version has its advantages and disadvantages, so learning more about how each works helps decide which one to use.

Note on adhesives: Most connectors use epoxies or other adhesives to hold the fibre in the connector. Use only the specified epoxy, as the fibre to ferrule bond is critical for low loss and long term reliability! We've seen people use hardware store epoxies, Crazy Glue, you name it! And they regretted doing it. 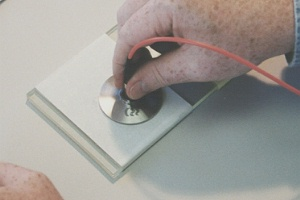 Epoxy/polish: Most connectors are the simple "epoxy/polish" type where the fibre is glued into the connector with epoxy and the end polished with special polishing film. These provide the most reliable connection, lowest losses (less than 0.5 dB) and lowest costs, especially if you are doing a lot of connectors. The epoxy can be allowed to set overnight or cured in an inexpensive oven. A "heat gun" should never be used to try to cure the epoxy faster as the uneven heat may not cure all the epoxy or may overheat some of it which will prevent it ever curing!

"Hot Melt": This is a 3M trade name for a connector that already has the epoxy (actually a heat set glue) inside the connector. You strip the cable, insert it in the connector, crimp it, and put it in a special oven. In a few minutes, the glue is melted, so you remove the connector, let it cool and it is ready to polish. Fast and easy, low loss, but not as cheap as the epoxy type, it has become the favourite of lots of contractors who install relatively small quantities of connectors.

Anaerobic adhesives: These connectors use a quick setting adhesive to replace the epoxy. They work well if your technique is good, but often they do not have the wide temperature range of epoxies, so only use them indoors. A lot of installers are using Loctite 648, with or without the accelerator solution, that is neat and easy to use.

Crimp/polish: Rather than glue the fibre in the connector, these connectors use a crimp on the fibre to hold it in. Early types offered "iffy" performance, but today they are pretty good, if you practice a lot. Expect to trade higher losses for the faster termination speed. And they are more costly than epoxy polish types. A good choice if you only install small quantities and your customer will accept them.

Prepolished/splice: Some manufacturers offer connectors that have a short stub fibre already epoxied into the ferrule and polished perfectly, so you just cleave a fibre and insert it like a splice. (See next section for splicing info.) While it sound like a great idea, it has several downsides. First it is very costly, five to ten times as much as an epoxy polish type. Second, you have to make a good cleave to make them low loss, and that is not as easy as you might think. Third, even if you do everything correctly, you loss will be higher, because you have a connector loss plus two splice losses at every connection! The best way to terminate them is to monitor the loss with a visual fault locator and "tweak" them.

Here are a few things to remember when you are terminating connectors in the field. Following these guidelines will save you time, money and frustration.