The usual fibre specifications you will see are size, attenuation and bandwidth. While manufacturers have other specs that concern them, like numerical aperture (the acceptance angle of light into the fibre), ovality (how round the fibre is), concentricity of the core and cladding, etc., these specs do not affect you.

Fibre optics, as we said, is sending signals down hair-thin strands of glass or plastic fibre. The light is "guided" down the centre of the fibre called the "core". The core is surrounded by a optical material called the "cladding" that traps the light in the core using an optical technique called "total internal reflection." The core and cladding are usually made of ultra-pure glass, although some fibres are all plastic or a glass core and plastic cladding. The fibre is coated with a protective plastic covering called the "primary buffer coating" that protects it from moisture and other damage. More protection is provided by the "cable" which has the fibres and strength members inside an outer covering called a "jacket".

Multimode and singlemode are the two types of fibre in common use. Both fibres are 125 microns in outside diameter - a micron is one one-millionth of a meter and 125 microns is 0.005 inches - a bit larger than the typical human hair.

Multimode fibre has light travelling in the core in many rays, called modes. It has a bigger core (almost always 62.5 microns, but sometimes 50 microns ) and is used with LED sources at wavelengths of 850 and 1300 nm (see below!) for slower local area networks (LANs) and lasers at 850 and 1310 nm for networks running at gigabits per second or more. Singlemode fibre has a much smaller core, only about 9 microns, so that the light travels in only one ray. It is used for telephony and CATV with laser sources at 1300 nm and 1550 nm.

Plastic Optical Fibre (POF) is large-core (about 1mm) fibre that can only be used for short, low-speed networks.
Step index multimode was the first fibre design but is too slow for most uses, due to the dispersion caused by the different path lengths of the various modes. 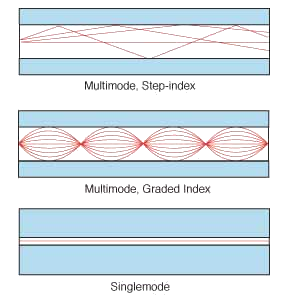 Graded index multimode fibre uses variations in the composition of the glass in the core to compensate for the different path lengths of the modes. It offers hundreds of times more bandwidth than step index fibre - up to about 2 gigahertz over 1 km.

Singlemode fibre shrinks the core down so small that the light can only travel in one ray. This increases the bandwidth to almost infinity - but it's practically limited to about 100,000 gigahertz - that's still a lot!

Fibre, as we said, comes in two types, singlemode and multimode. Except for fibres used in specialty applications, singlemode fibre can be considered as one size and type. If you deal with long haul telecom or submarine cables, you may have to work with specialty singlemode fibres.

Multimode fibres originally came in several sizes, optimised for various networks and sources, but the data industry standardised on 62.5 core fibre in the mid-80s (62.5/125 fibre has a 62.5 micron core and a 125 micron cladding.) Recently, as gigabit and 10 gigabit networks have become widely used, an old fibre has been revived. The 50/125 fibre was used from the late 70s with lasers for telecom applications before singlemode fibre became available. It offers higher bandwidth with the laser sources used in the gigabit LANs and can go longer distances. While it still represents a smaller volume than 62.5/125, it is growing.