Don't let the title put you off, it's pretty basic. The amount of light scattered back to the OTDR for measurement is quite small, about one-millionth of what is in the test pulse, and it is not necessarily constant. This affects the operation and accuracy of OTDR measurements.

Since so little of the light comes back to the OTDR for analysis, the OTDR receiver circuit must be very sensitive. That means that big reflections, which may be one percent of the outgoing signal, will saturate the receiver, or overload it. Once saturated, the receiver requires some time to recover, and until it does, the trace is unreliable for measurement as shown in Figure 5.

The most common place you see this as a problem is caused by the connector on the OTDR itself. The reflection causes an overload which can take the equivalent of 50 meters to one kilometre (170 to 3280 feet) to recover fully, depending on the OTDR design, wavelength and magnitude of the reflection. It is usually called the "Dead Zone". For this reason, most OTDR manuals suggest using a "pulse suppressor" cable, which doesn't suppress pulses, but simply gives the OTDR time to recuperate before you start looking at the fibre in the cable plant you want to test. They should be called "launch" cables. 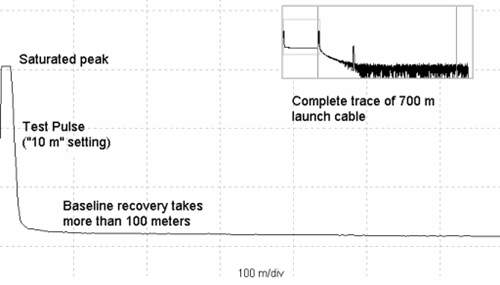 Do not ever use an OTDR without this launch cable! You always want to see the beginning of the cable plant and you cannot do it without a launch cable. It allows the OTDR to settle down properly and gives you a chance to see the condition of the initial connector on the cable plant. It should be long, at least 500 to 1000 meters to be safe, and the connectors on it should be the best possible to reduce reflections. They must also match the connectors being tested, if they use any special polish techniques. Launch cables, supplied in convenient small carrying cases are available from Tech Optics and details can be found by clicking here.

If you are testing short cables with highly reflective connectors, you will likely encounter "ghosts" like in Figure 6. These are caused by the reflected light from the far end connector reflecting back and forth in the fibre until it is attenuated to the noise level. Ghosts are very confusing, as they seem to be real reflective events like connectors, but will not show any loss. If you find a reflective event in the trace at a point where there is not supposed to be any connection, but the connection from the launch cable to the cable under test is highly reflective, look for ghosts at multiples of the length of the launch cable or the first cable you test. You can eliminate ghosts by reducing the reflections, using a trick we will share later. 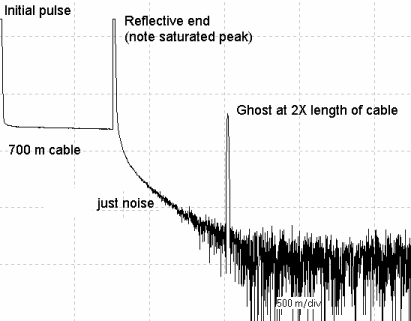 On very short cables, multiple reflections can really confuse you! We once saw a cable that was tested with an OTDR and deemed bad because it was broken in the middle. In fact it was very short and the ghosted image made it look like a cable with a break in the middle. The tester had not looked at the distance scale or he would have noted the "break" was at 40 metres and the cable was only 40 metres long. The ghost at 80 metres looked like the end of the cable to him!

Looking the opposite way, from a low loss fibre to a high loss fibre, we find the backscatter goes up, making the measured loss less than it actually is. In fact, this often shows a "gainer", a major confusion to new OTDR users.

The difference in backscatter can be a major source of error. A difference in attenuation of 0.1 dB per km in the two fibres can lead to a splice loss error of 0.25 dB! While this error source is always present, it can be practically eliminated by taking readings both ways and averaging the measurements, and many OTDRs have this programmed in their measurement routines. This is the only way to test in line splices for loss and get accurate results.

One can overcome these variations in backscatter by measuring with the OTDR in both directions and averaging the losses. The errors in each direction cancel out, and the average value is close to the true value of the splice or connector loss. Although this invalidates the main selling point of the OTDR, that it can measure fibre from only one end, you can't change the laws of physics.

The next thing you must understand is OTDR resolution. The OTDR test pulse, Figure 8, has a long length in the fibre, typically 5 to 500 meters long (17 to 1700 feet). It cannot see features in the cable plant closer together than that, since the pulse will be going through both simultaneously. This has always been a problem with LANs or any cable plant with patchcords, as they disappear into the OTDR resolution. Thus two events close together can be measured as a single event, for example a connector that has a high loss stress bend near it will show up on the OTDR as one event with a total loss of both events. While it may lead you to think the connector is bad and try to replace it, the actual problem will remain.

Another place this problem shows up is in splice closures. An OTDR may show a bad splice, but it can actually be a crack or stress point somewhere else in the splice closure.

There is a tool that will help here. It is called a "visual fault locator". It injects a bright red laser light into the fibre to find faults. If there is a high loss, such as a bad splice, connector or tight bend stressing the fibre, the light lost may be visible to the naked eye. This will find events close to the OTDR or close to another event that are not resolvable to the OTDR. It's limitation is distance too, it only works over a range of about 2.5 miles or 4 km.

The visual fault locator is so valuable a tool that many OTDRs now have one built into them. If you are using an OTDR, you must have one to use it effectively.

Most OTDR measurements are made with singlemode fibre, since most outside plant cable is singlemode. But building and campus cabling are usually multimode fibre using light emitting diode sources for low and medium speed networks. The OTDR has problems with multimode fibre, since it uses a laser source to get the high power necessary to cause high enough backscatter levels to measure.

Figure 9. OTDRs only see the middle of the multimode fibre core

And finally, OTDRs measure fibre not cable length. While this may sound obvious, it causes a lot of problems in buried cable. You see, to prevent stress on the fibre, cable manufacturers put about 1% more fibre in the cable than the length of the cable itself, to allow for some "stretch." If you measure with the OTDR at 1000 metres (3300 feet), the actual cable length is about 990 metres (3270 feet). If you are looking for a spot where the rats chewed through your cable, you could be digging 10 metres (33 feet) from the actual location!